At the pinnacle of his success as chief executive and editor in chief of Esquire magazine, Phillip Moffitt walked away from it all – the glamour, the accolades, the punishing schedule – and chose instead to wake up each morning and breathe, to explore the mysteries he had always intuited. 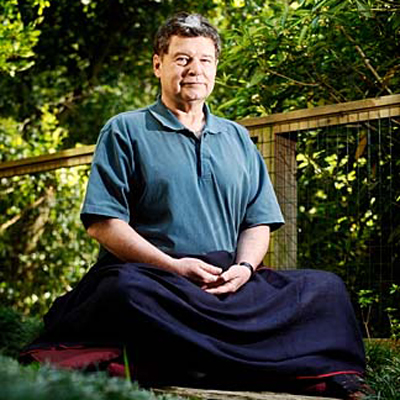 At the pinnacle of his success as chief executive and editor in chief of Esquire magazine, Phillip Moffitt walked away from it all – the glamour, the accolades, the punishing schedule – and chose instead to wake up each morning and breathe, to explore the mysteries he had always intuited.

“I was drawn to a sense that there was a greater meaning to life than getting ahead. It felt intuitively, intrinsically to me as is true for most people, that in the midst of all we know – science – there is a relatedness that’s possible, a mystery; it’s always drawn me.”

It was 1987, and Moffitt had no real plan. Married for part of this time, he spent the next several years living in various meditation centers “in rooms so small that [he] could often reach out and touch both walls,” according to his new book.
That path, undertaken 20 years ago, brought Moffitt to Marin County in the early ’90s, and to his current incarnation as founder and president of the Life Balance Institute, a nonprofit organization in Marin dedicated to helping people find balance based on spiritual values, in their daily life.

His first dharma book, “Dancing With Life: Buddhist Insights for Finding Meaning and Joy in the Face of Suffering” (Rodale, 2008), a guide to living a more meaningful life, will be published next week.

Based on the Buddha’s core teaching of the Four Noble Truths, the book grew out of Moffitt’s own experience following the teachings and meditation practices of Theravada Buddhism. But the book, as well as his Life Balance work, draws just as much from the rest of his journey as well. To hear Moffitt, now 61, muse on the course of his life is to witness a certain history in the making, his own, of course, as well as a version of the modern American dream.

Moffitt’s career began at the University of Tennessee, where he and some colleagues created a free guide for incoming freshman, which grew into a national college magazine and later led to the creation of the publishing company that eventually bought Esquire.

When Moffitt and his friend Christopher Whittle purchased it, the much-beloved magazine had been losing money as well as audience.

“The magazine had lost its way, and I felt when I took it over that I was curator of a great institution,” Moffitt said. “My job was restoring it to greatness, not inventing it but restoring it to its roots.” Moffitt did this by focusing on what he saw men hungering for.

“The ’80s was the era of cocaine,” said Moffitt, “and I detested cocaine and what it was doing, what it did do to our society. So this idea of quick money, quick success and the cynicism involved in that, that tone was quite strong in our society.” Moffitt countered that by creating an Ethics column, a section called New America and articles exploring “what does a man do.”

“What turned out to be my gift is that I had empathy for my audience, and I could feel their lives in such a way that I could create an editorial offering that touched them,” said Moffitt. “I believed that Esquire‘s literary background and hipness could mix with articles that showed caring, that treated people as if they cared about the world and their lives.”

Not everyone appreciated his new direction; many were nostalgic perhaps for the magazine’s former literary glory. In a Time magazine story on Esquire at mid-century, a former editor said about Moffitt and Whittle and their success in putting the magazine back in the black: “They are marketing people more than journalists. Theirs is a valuable publication, but is it Esquire? Only some of it is.”

Nonetheless, the magazine’s circulation jumped to a respectable 750,000 by the time Moffitt sold it to the Hearst Corp. (which also owns The Chronicle) in 1987. Its two strongest markets were New York and Los Angeles. “People would say to me all the time, (your magazine) touches my heart,” he said. “They were super successful kinds of guys who you’d never imagine would say this, and in another kind of group they’d never admit it, but with me they would.”

When Moffitt walked away from the magazine, the local media were stunned. The New York Times, Vanity Fair and the New Yorker sent reporters to interview him, but when they heard his reason, they shrugged. No one ran the story. Moffitt laughed. “A non-starter story. No seeming drama,” he said. “But it was a trend story. I was at the front end of the trend and they just didn’t get it. If someone else had done that, I would’ve made it the cover story on Esquire.”

So Moffitt left to do what? He didn’t really know. Although he was financially secure, he still had to deal with the realities of the radical choice he had made. “My years in the desert – let’s say seven,” he said, “I could count that a lot of different ways. It was a long time. It was very hard to do.” What he had not counted on was the person who would wake up every morning. “That person was this warrior who was geared up to succeed and needed a goal,” he said.

The first thing that struck him that he wasn’t prepared for was that it felt very uncomfortable not earning a paycheck.
“I felt somehow I was not contributing my share,” he said. “I would have to tell myself that it was OK to be in this state of waiting for something to emerge. It’s OK, you’re not being indulgent. I’d always been a worker, an extreme worker.”

Then there were the days that followed one after another without revealing anything in particular. “I had this kind of pride that I could (foresee) how long a transition would take, because I had been reasonably good at figuring out how long it would take” to make a new project successful,” he said. Moffitt assumed it would take him three years, maybe five, to figure out what he was doing. “So when that five years came, and I didn’t feel this purpose I expected, I was like, ‘Oh no,’ ” he said. “You could look at my life and say, ‘He succeeds at everything he does,’ but really there’s a lot of, ‘well, we’ll see.'”

Did he have regrets? “Leaving when I did, I had just reached my big earning days when I was going to be raking in millions and millions. That was such a big decision,” he said, “not being involved in the contest of it all, not seeing how could I do against other people. I missed that at times. Could I be creative in this era? How would my creativity hold up? I had had a voice in our society’s discussion at Esquire, and I gave up consciously that I was going to have that voice, and I missed that.”

Gradually a life began to form for him. He was teaching Hatha yoga and meditation and over time, people came to see him individually for advice. “Sometime along the way it became what I was doing,” he said. “I never had an ambition. There was never any ‘I’m going to get there’ or ‘I was this.’ It just evolved, it manifested.”

Where the wandering in the desert eventually led Moffitt was to teaching the dharma – the Sanskrit word means path – and counseling people. At the Life Balance Institute, he works with leaders in the profit and nonprofit world who come and sit on his couch, and together they do a strategic analysis of their lives based on their values. “I’m not trying to help someone get ahead,” he said. “I’m interested in them having a plan for their lives based on their values.”

Often, people come to him because something’s not working right in their lives or they’ve achieved what they wanted and wonder if this is all there is. He’s quick to point out that he’s not a therapist, but can be a good guide because he can relate to the struggle.

“I’ve been able to say things to people that others have not been able to say because I’ve been in their situation, with that dollar amount, so that’s very useful,” he said. But the vast majority of Moffitt’s time these days is spent in teaching the dharma – at retreat centers around the United States and at a weekly meditation class that meets on Sunday evenings in Corte Madera. He says he wouldn’t do the Life Balance work full time. “Whatever is satisfied in offering the dharma, is deeply satisfying,” he said. “It doesn’t exactly satisfy ones ego, but it satisfies something.”

He’s found deep gratification as well from bringing “Dancing With Life” to fruition. From his first inspiration, which came during a retreat when a teacher spoke about the foundation of Buddhist beliefs, to its publication – the journey has been profound, he said. Through his writing, he said, he realized that the teachings are not just a creed or philosophy but also an actual practice of insight and realization that can lead to wisdom, happiness and ultimately freedom.

Moffitt says he plans to develop classes based on his book, and there are two more books on mindfulness in the works. He and his three-person staff have outgrown their current space and are looking for a larger one where they will continue to offer Life Balance work and classes.

His current surroundings are light- years away from the urban buzz of New York City in the ’80s. The Life Balance Institute is tucked away in an upscale but low-key neighborhood in Belvedere. A weathered wood-shingled fence and a stone Buddha statue lead to steps going down through a lush garden to Moffitt’s house, the Life Balance Institute office and the ocean beyond.

“It just felt like this was the way to go,” he mused about his life path. “There was no great transcendence, no great vision, just this intuition.” And, he added, “I am deeply satisfied by other people’s happiness.”