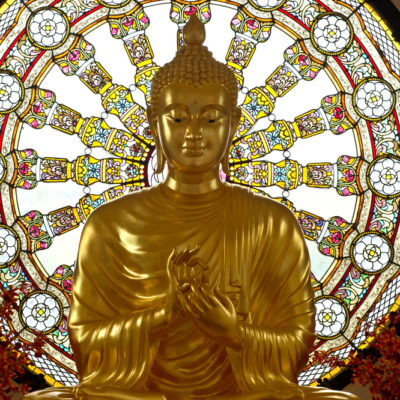 (These definitions were reprinted, with permission, from “A Glossary of Pali and Buddhist Terms”. The complete glossary, may be found on the Web at: www.accesstoinsight.org/glossary Elsewhere on Access to Insight (www.accesstoinsight.org) you will find a wealth of readings and information on Theravada Buddhism. Many thanks to the site creator and manager for graciously allowing us to freely excerpt from the glossary.)

These are Pali and technical terms. The most common spellings are listed first, followed by alternates. The parentheses immediately following each head-word contain the phonetic Pali spelling according to the Velthuis convention. Skt. = Sanskrit

Abhidhamma [abhidhamma]: (1) In the discourses of the Pali Canon, this term simply means “higher Dhamma,” and a systematic attempt to define the Buddha’s teachings and understand their interrelationships. (2) A later collection of analytical treatises based on lists of categories drawn from the teachings in the discourses, added to the Canon several centuries after the Buddha’s life.

appamada [appamaada]: Heedfulness; diligence; zeal. The cornerstone of all skillful mental states, and one of such fundamental import that the Buddha stressed it in his parting words to his disciples: “All fabrications are subject to decay. Bring about completion by being heedful!.”

arahant [arahant]: A “worthy one” or “pure one”; a person whose mind is free of defilement, who has abandoned all ten of the fetters that bind the mind to the cycle of rebirth, whose heart is free of mental effluents, and who is thus not destined for further rebirth. A title for the Buddha and the highest level of his noble disciples.

bhikkhu [bhikkhu]: A Buddhist monk; a man who has given up the householder’s life to live a life of heightened virtue in accordance with the Vinaya in general, and the Patimokkha rules in particular.

bhikkhuni [bhikkhunii]: A Buddhist nun; a woman who has given up the householder’s life to live a life of heightened virtue (sila) in accordance with the Vinaya in general, and the Patimokkha rules in particular.

bodhisatta [bodhisatta]: “A being (striving) for Awakening,” the term used to describe the Buddha before he actually became the Buddha, from his first aspiration to Buddhahood until the time of his full Awakening. Sanskrit form: Bodhisattva

brahma-vihara [brahma-vihaara]: The four “sublime” or “divine” abodes that are attained through the development of boundless metta (goodwill), karuna (compassion), mudita (appreciative joy), and upekkha (equanimity).

Buddha [buddha]: The name given to one who rediscovers for himself the liberating path of Dhamma, after a long period of its having been forgotten by the world. According to tradition, there is a long line of Buddhas stretching into the distant past. The most recent Buddha was born Siddhattha Gotama in India in the sixth century BCE. A well-educated and wealthy young man, he relinquished his family and his princely inheritance in the prime of his life to search for true freedom and an end to suffering (dukkha). After seven years of austerities in the forest, he rediscovered the “middle way” and achieved his goal, becoming Buddha.

dana [daana]: Giving, liberality; offering, alms. Specifically, giving of any of the four requisites to the monastic order. More generally, the inclination to give, without expecting any form of repayment from the recipient. Dana is the first theme in the Buddha’s system of gradual training, the first of the ten paramis, one of the seven treasures, and the first of the three grounds for meritorious action.

dhamma [dhamma; Skt. dharma]: (1) Event; a phenomenon in and of itself; (2) mental quality; (3) doctrine, teaching; (4) nibbana. Also, principles of behavior that human beings ought to follow so as to fit in with the right natural order of things; qualities of mind they should develop so as to realize the inherent quality of the mind in and of itself. By extension, “Dhamma” (usu. capitalized) is used also to denote any doctrine that teaches such things. Thus the Dhamma of the Buddha denotes both his teachings and the direct experience of nibbana, the quality at which those teachings are aimed.

kalyanamitta [kalyaa.namitta]: Admirable friend; a mentor or teacher of Dhamma

kamma [kamma; Skt. karma]: Intentional acts that result in states of being and birth.

karuna [karunaa]: Compassion; sympathy; the aspiration to find a way to be truly helpful to oneself and others. One of the ten perfections (paramis) and one of the four “sublime abodes” (brahma-vihara).

Mara [maara]: The personification of evil and temptation.

metta [mettaa]: Loving-kindness; goodwill. One of the ten perfections (paramis) and one of the four “sublime abodes” (brahma-vihara).

mudita [muditaa]: Appreciative/sympathetic joy. Taking delight in one’s own goodness and that of others. One of the ten perfections (paramis) and one of the four “sublime abodes”.

naga [naaga]: A term commonly used to refer to strong, stately, and heroic animals, such as elephants and magical serpents. In Buddhism, it is also used to refer to those who have attained the goal of the practice.

nibbana [nibbaana; Skt. nirvana]: Liberation; literally, the “unbinding” of the mind from the mental effluents, defilements, and the round of rebirth, and from all that can be described or defined. As this term also denotes the extinguishing of a fire, it carries the connotations of stilling, cooling, and peace. (According to the physics taught at the time of the Buddha, a burning fire seizes or adheres to its fuel; when extinguished, it is unbound.) “Total nibbana” in some contexts denotes the experience of Awakening; in others, the final passing away of an arahant.

Pali [papanca]: The canon of texts preserved by the Theravada school and, by extension, the language in which those texts are composed.

papanca [papa~nca]: Complication, proliferation. The tendency of the mind to proliferate issues from the sense of “self.” This term can also be translated as self-reflexive thinking, reification, falsification, distortion, elaboration, or exaggeration. In the discourses, it is frequently used in analyses of the psychology of conflict.

parami, paramita [paaramii, paaramitaa]: Perfection of the character. A group of ten qualities developed over many lifetimes by a bodhisatta, which appear as a group in the Pali Canon only in the Jataka (“Birth Stories”): generosity (dana), virtue (sila), renunciation (nekkhamma), discernment (panna), energy/persistence (viriya), patience/forbearance (khanti), truthfulness (sacca), determination (adhitthana), good will (metta), and equanimity (upekkha).

piti [piiti]: Rapture; bliss; delight. In meditation, a pleasurable quality in the mind that reaches full maturity upon the development of the second level of jhana.

saddha [saddhaa]: Conviction, faith. A confidence in the Buddha that gives one the willingness to put his teachings into practice. Conviction becomes unshakeable upon the attainment of stream-entry.

samadhi [samaadhi]: Concentration; the practice of centering the mind in a single sensation or preoccupation, usually to the point of jhana.

samsara [sa.msaara]: Transmigration; the round of death and rebirth.

sangha [sangha]: On the conventional (sammati) level, this term denotes the communities of Buddhist monks and nuns; on the ideal (ariya) level, it denotes those followers of the Buddha, lay or ordained, who have attained at least stream-entry, the first of the transcendent paths culminating in nibbana. Recently, particularly in the West, the term “sangha” has been popularly adapted to mean the wider sense of “community of followers on the Buddhist path,” although this usage finds no basis in the Pali Canon.

sati [sati]: Mindfulness, self-collectedness, powers of reference and retention. In some contexts, the word sati when used alone covers alertness as well.

sila [siila]: Virtue, morality. The quality of ethical and moral purity that prevents one from falling away from the eightfold path. Also, the training precepts that restrain one from performing unskillful actions. Sila is the second theme in the gradual training, one of the ten paramis, the second of the seven treasures, and the first of the three grounds for meritorious action.

sutta [sutta; Skt. sutra]: Literally, “thread”; a discourse or sermon by the Buddha or his contemporary disciples. After the Buddha’s death the suttas were passed down in the Pali language according to a well-established oral tradition, and were finally committed to written form in Sri Lanka around 100 BCE. More than 10,000 suttas are collected in the Sutta Pitaka, one of the principal bodies of scriptural literature in Theravada Buddhism. The Pali Suttas are widely regarded as the earliest record of the Buddha’s teachings.

Theravada [theravaada]: The “Doctrine of the Elders” – the only one of the early schools of Buddhism to have survived into the present; currently the dominant form of Buddhism in Thailand, Sri Lanka, and Burma.

tiratana [tiratana]: The “Triple Gem” consisting of the Buddha, Dhamma, and Sangha – ideals to which all Buddhists turn for refuge.

upekkha [upekkhaa]: Equanimity. One of the ten perfections (paramis) and one of the four “sublime abodes” (brahma-viharas).

Vinaya [vinaya]: The monastic discipline, spanning six volumes in printed text, whose rules and traditions define every aspect of the bhikkhus’ and bhikkhunis’ way of life. The essence of the rules for monastics is contained in the Patimokkha. The conjunction of the Dhamma with the Vinaya forms the core of the Buddhist religion: “Dhamma-vinaya” – “the doctrine and discipline” – is the name the Buddha gave to the religion he founded.

vipassana [vipassanaa]: Clear intuitive insight into physical and mental phenomena as they arise and disappear, seeing them for what they actually are – in and of themselves – in terms of the three characteristics and in terms of stress, its origin, its disbanding, and the way leading to its disbanding.